There was a metal door that took both hands
of a strong man to open
but we did it daily. Inside were our charges, sealed in
submarine darkness. We swam
through their booze, past the pool
table’s alien island, darts that thwacked the pricked wall
like failure itself, spinning like downed ducks
to the filthy tile. Like good dogs, we fetched them.
In a windowless silence, we watched our drunks
bend like sycamores in an all-day snowstorm.
When they slept, we let them, then shook them
with the tenderness of mothers.
They woke and smoked, still dreaming, wore their trade
on their fingers—coal or dirt or grease.
On the jukebox, five songs repeated, each a lament
about cheating women. We hummed along,
bore the plodding joke, slurred compliment,
nodded at creased photographs of estranged children.
The beer rose in gushes. Our forearms bulged.
One girl, what she wanted before she died
was to see the ocean. Froth pillowed up
from subterranean barrels, through pipes and pulleys.
We wore out our pity, watching men stroke the bar
like the hardened brushed hair of a daughter.
We wore ours in scarves. Our hoop earrings swayed
on the downbeat. We held rags
or tucked them in jeans, tattooed the names
of ex-husbands, first lovers, into our skin
in script so thick and Bible-elaborate as to be illegible.
One wore her drugged-out son’s childhood face
on her wrist, his doomed grin following us.
Men brought their kids when the wives needed peace.
We gave them Cokes and bowls of cherries,
let them draw on napkins and pinned up the drawings.
Sometimes we spun them on the make-believe dance
floor, trying to turn despair into a party. 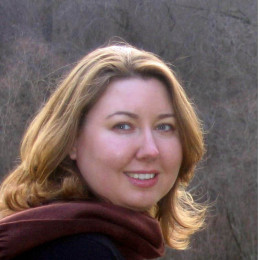 Paula Bohince, who won second prize in the National Poetry Competition 2013, is the author of two poetry collections, both from Sarabande: The Children and Incident at the Edge of Bayonet Woods. Her poems have appeared in The New Yorker, The New York Review of Books, Poetry, TLS, The Irish Times, Granta and Poetry London. She has received the George Bogin Memorial Award from the Poetry Society of America, the ‘Discovery’ and The Nation Award, the Amy Lowell Poetry Travelling Scholarship and a fellowship from the National Endowment for the Arts. She lives in the US.