If a flower is always a velvet curtain
onto some peepshow he never opens,

it’s a shock to find himself sheltering
from the storm in a greenhouse,

seduced by a leaf blushing blue
at the tips, begging to be stroked.

He’s caught in the unfamiliar ruffle
of knickerbockers or petticoat, a scent

of terror, vanilla musk. If he were
not himself, he’d let his trembling lips

articulate the malleability of wax;
the bruise of bracts, petals, purple

washed up off Curieuse or Silhouette.
But being Bernard, he’s dumbstruck,

a buffoon in front of a saloon honey
high-kicking the can-can. Can’t-can’t.

He attempts to cool himself, thinking
about sea horses, Hippocampus erectus,

listening to the rain refusing to stop,
soft against the steamed-up glass.

Winner of the National Poetry Competition 2013.

From the judge: 'This strange narrative of a man being seduced by a plant charmed the judges with its vivid imagery and linguistic wit. Its precisely honed couplets move from elegant description (‘the bruise of bracts, petals, purple // shrimps’) to a tragicomic climax, in which our hero finds himself ‘a buffoon in front of a saloon honey / high-kicking the can-can. Can’t-can’t’. Truly imaginative and richly musical, ‘Bernard and Cerinthe’ is as much a pleasure to read on the page as it is on the tongue, and as such was the unanimous choice of the judges for first place in this year’s National Poetry Competition.' Jane Yeh

Linda France on what inspired the poem: ‘I remember very particularly the day I wrote this poem, actually. I went to visit a friend of mine who has the most beautiful garden. It was the end of August and there was a plant I'd never seen before: Cerinthe major 'Purpurascens', and I was just astonished by it. It's a very intense blue and the leaves are a silvery green... they're quite thick, almost waxy, fleshy. That's one of the things I'm drawn to about plants, they express this tremendous “Otherness”, but they just stay there and let you respond to them, unlike a bird or animal that disappears....'

You can listen to a podcast of Linda talking about winning the National Poetry Competition. 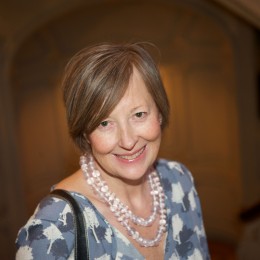 Linda France, winner of the National Poetry Competition 2013, is based close to Hadrian’s Wall, near Hexham in Northumberland. Since 1992 she has published seven poetry collections with Bloodaxe, Smokestack and Arc, including The Gentleness of the Very Tall, The Toast of the Kit-Cat Club, book of days and You are Her. She has worked on numerous collaborations with visual artists and musicians, as well as public art projects. Linda also edited the ground-breaking anthology Sixty Women Poets (Bloodaxe 1993).