He wore the night in his fur, sat on a rung
between the rails, tail wisping like smoke

as a distant train split the air along its seam.
Its coming headlight laid down track

and placed an opal into each black seed
of the cat’s eyes, every blink slow as an eclipse.

Soon the white light pinned him, the only drop
of night left as vibration turned the rails to mercury.

But there was no give in the cat, no flex anywhere
but his tail. And for a moment their roles reversed,

as though it were the train facing the inevitable cat,
the end of the line. The world lit up like a page

and the train a sentence before the full-stop.

'Cat on the Tracks' was commended in the 2014 National Poetry Competition.

Filmpoem by Katie Garrett. Commissioned in collaboration with Alastair Cook and Filmpoem.

From the judges: The ingenious structure of 'Cat on the Tracks' produces an eerie sense of inevitability, where the lines of both poem and the train hurtle on their collision course. The filmic detail of the cat's eyes' slow blink draws us into a parallel world in which physical laws seem – just for a moment – suspended. – Zoë Skoulding. 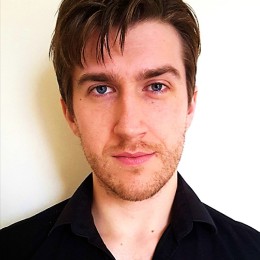 Mark Pajak was born in Merseyside. He is a graduate of the Liverpool Everyman and Playhouse’s Young Writers Programme and has been published with; The Rialto, Magma, Ink, Sweat & Tears and In The Red Magazine among others. He is currently completing a Creative Writing MA at Manchester Metropolitan University, while putting together his first pamphlet. He was commended in The Poetry Society's National Poetry Competition 2014.