he’d named his boat Cimsagro – echoes of a Tahitian isle, maybe,
of Maupiti, Tubuai, Cimsagro – and, like Fletcher’s, I was his island girl.

White-shirted, he draped flower garlands around my neck. I was Maimiti –
we held hands on his deck, then kissed like there was no From Here to Eternity.

As we rolled on rising waves, bare-backed white-horses cantered by,
swelling seas rocked our finger-touches, salty tongues flicked to and fro.

If we’d been land-locked, no doubt the earth would have moved, rockets exploded –
instead the tide trampolined us, unmattressed, from port to star-spangled-board.

Yet we reached our ecstasies. I turned to him and whispered in a Christian ear:
Why ‘Cimsagro’? Why not ‘The Bounty’, ‘Tall Sails’ or ‘She Got the House’?

and he replied, Sail backwards, my love – you’ll find it’s a place we’ve both just been.

A winner of the Poetry News Members' Poems competition on the theme of 'Looking back', judged by Daljit Nagra. 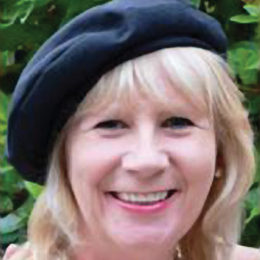 Jill Munro has been widely published in poetry magazines and long-listed three times for the National Poetry Competition. Her first collection Man from La Paz was published in 2015 by Green Bottle Press. She won the Fair Acre Press Pamphlet Competition 2015 with The Quilted Multiverse, published April 2016.