Beyond the house, where the woods
dwindle to a few stray trees, my father
walks on the lake with a hammer.

He’s never seen so many stars,
and wonders why
with all that light in the sky

it doesn’t cast a single shadow.
He takes a few blows at the ice, and drops
a sackful of bricks

and kittens into the hole, listens
a moment to the stillness of deep winter,
the hugeness of the sky, the bubbles of warm

oxygen breaking under his feet,
like the fizz in a lemonade; the creaking
of ice as it settles itself.

His father’s at home, coaxing voices
out of a crystal set, a concert from London.
Ghosts in a stone.

My father doesn’t like that, he prefers
the magic of landscapes, of icicles
growing like fangs from the gutters of houses,

the map of the constellations. He turns on the bank
and looks at the sky. Orion rising over Bradford,
Cassiopeia’s bold W, asking Who, What, When

and Why? And down in the lake, the sudden
star-burst of four kittens under a lid of ice,
heading to the four corners of nowhere. 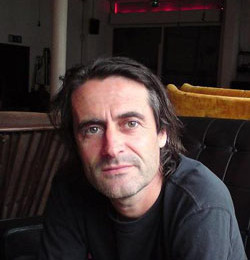 Neil Rollinson has published three collections of poetry: A Spillage of Mercury, Spanish Fly and Demolition, all published by Cape and Poetry Book Society Recommendations. In 1997, he won the National Poetry Competition with his poem 'Constellations'. He won a Cholmondeley Award in 2005.