Skip to content
Home >Poems >behind barraclough, behind the poem, from Sunspots, The Poetry Review >from Sunspots
News About Search Donate Shop

For I will consider my Star Sol.
For I am the servant of this Living God and daily serve her.
For at the first glance of the glory of God in the East I worship in my way.
For this is done by fixing espresso and watching the pinkening light on The Shard.
For then she waves her warmth across the scene and lifts the hearts of those who took a Night Bus at 4 a.m. to clean HQs.
For she tickles the orbitals of foxes in their stride and hies them home.
For having risen and settled into her groove she begins to consider herself.
For this she performs in eleven degrees.
For first she does the Planck to strengthen core stability.
For secondly she runs a malware scan for comets closing in.
For thirdly she completes the paperwork for eclipses total, annular and partial.
For fourthly: flares.
For fifthly she sorts her sunspots into pairs.
For sixthly she gives neutrinos Priority Boarding.
For seventhly she referees the arm-wrestling match between the upstart fusion and gravity.
For eighthly she weaves flux ropes and thinks up skipping games.
For ninthly she degausses her plasma screens.
For tenthly she is profligate with her photons.
For eleventhly: star jumps.
For having considered herself she will consider her neighbours.
For she runs a cloth around the ecliptic to make it gleam.
For she oils the wheels of any planets gliding there.
For she sends invites out to wallflowers in the Oort cloud.
For she issues shadows for children to dodge as they make their way to school.
For she shakes out her blankets for devotees of helioseismology.
For when she takes her prey she plays with it to give it a chance.
For one planet in nine escapes by her dallying.
For in her morning orisons she loves the Earth and the Earth loves her.
For she is of the tribe of Tyger! Tyger!
For she hands out colouring books to chameleons in the morning.
For when it is time to rise she blushes to be seen at so intimate an hour.
For when it is time to set she is crimson ashamed to run out on us.
For though she neither rises nor sets she thinks it best that we believe so, so that we can take our rest and fuel our waking with anticipation.
For she lifts oceans over mountains without thinking.
For she tries to solve the puzzle of the weather, placing this here and that there and attempts to even out the air.
For she is a mixture of gravity and waggery.
For she’s a stickler for solstices.
For she booms like a woofer for those that can hear.
For she cares not what lives as long as all live.
For she takes her time.
For she lenses the light from distant stars to swerve it into our sockets.
For sometimes in the winter haze she’s as pale as a lemon drop and lets u watch her bathe unpunished.
For she never calls in sick.
For her colours are open-source.
For every raindrop’s an excuse for Mardi Gras,
For she will work on her drafts for a million years and release them typo-free.
For she will lash out and then regret the hurt.
For she promises radio hams jam tomorrow.
For your power grid is a cobweb she walks into when she steps off her porch.
For she kept mum through the Maunder Minimum.
For her behaviour is definitely ‘on the spectrum’.
For she keeps dark about dark matter but she definitely knows something.
For she plays Miss Prism in The Importance of Being Furnaced.
For she offers board and lodging to Turner’s ‘Angel in the Sun’.
For she made a great figure in Egypt for her signal services.
For she can fuse the wounded parts of a broken heart and release the lost mass as hope.
For she spins plates to create auroras.
For she leaves clues all over the place: some cryptic, some quick, some general knowledge-based.
For she is hands-off.
For she tends to micro-manage.
For she lays down squares of light for your pets to sleep in.
For she turns a blind eye to all the creeping, swooping killers of the night but leaves a Moon-faced night-light on.
For her sunquakes flatten no buildings, gridlock no cities, disgorge no refugees.
For she is not too proud to dry your smalls.
For she gives us heliopause and time to rethink disastrous decisions.
For Ray-Bans.
For she polarises opinion.
For her secrets are waiting to free us.
For she appreciates Stonehenge and visits every day.
For she sets herself by the grid of Manhattan.
For she will kill you with the loving of you.
For she can shine.

"Sunspots was for four years in the making but very early on I knew that I wanted to tackle the form, patterning and wildly varying tone of Smart’s great work. It turned out to be one of the last poems I wrote because it needed four years of writing, travelling and research to reach the point where I felt I might be able to do it justice...." Simon Barraclough.

Read Simon's Behind the Poem piece in full. 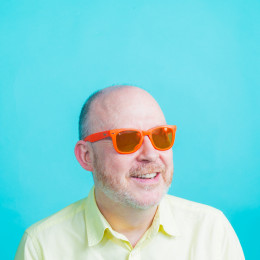 Simon Barraclough studied English at Nottingham University and has an MA in Critical Theory from Sussex University. He has taught for the Poetry School, Morley College and City Lit, London. His debut collection, Los Alamos Mon Amour (Salt, 2008) was shortlisted for the Forward Prize for Best First Collection. Other publications include a pamphlet of commissioned poems, Bonjour Tetris (Penned in the Margins, 2010), his second full collection Neptune Blue (Salt, 2011) and, most recently, Sunspots (Penned in the Margins, 2015). He has devised live, multimedia events incorporating his other passions of film and music. These include Psycho Poetica and The Debris Field (with Isobel Dixon and Chris McCabe), the texts of which have been published by Sidekick Books. In 2014 he was poet-in-residence at the Mullard Space Science Laboratory and edited an anthology of poems by scientists, Laboratorio (Sidekick Books, 2015). A live show based on Sunspots will be touring the UK from October 2015.