Most of the time I saw Granddad indoors,
first in his dark room with blue gas mantles
and a kitchen range and one tall window
in Poplar, then in the overheated lounge
of Aunt Nell and Uncle George’s new flat
in Morden when he was in his nineties.
But he came to stay in our house sometimes,
and it must have been when he was leaving
that I saw him wearing his trilby hat.
It was grey and sleek like a new plush toy.
No one had ever made our two front steps
more like a staircase in a stately home,
not even Mum with her polio feet.
Crowning himself slowly, his own archbishop,
holding on to a handrail like a sceptre,
he turned with no more haste than one of the ships
he had sailed in round Cape Horn as a boy
in another century, approached each step
like a descent to be addressed with ropes.
Grandly he lowered one foot, then the other,
while we watched him, silently exclaiming
vivat, and the black and white chess-board
of the path to the front gate stretched out
like a long drive lined with waving flags. 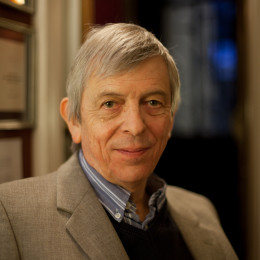 John Freeman won third prize in the National Poetry Competition 2012. He was born in Essex, grew up in South London and studied English at Cambridge. He lived in Yorkshire before moving to Wales where he teaches at Cardiff University. Collections include The Light Is Of Love, I Think: New and Selected Poems (Stride), Landscape With Portraits (Redbeck) and A Suite for Summer (Worple). Stride also published a book of essays, The Less Received: Neglected Modern Poets. Recent magazine publications include Iota, Poetry Wales, Scintilla and The Lampeter Review.