My father carried his mother through Yugoslavia
and Greece. Stitched into the lining of his coat
and against regulations, she kept him company
through the days he hid in back rooms and under stairs;
suckled him on nights huddled in churchyards,
with only the chatter of his pad and key. He folded her
into his wallet, where she was rubbed by the grub of pound
notes, discharge papers, a thank-you letter
from General Tito. Around her neck, in miniature,
her brother, on a row of cultured pearls: his face
crimped by the crease of leather. His eyes show no hint
of my mother, though he has her lips. He is his pre-gassed,
pre-shot self. And I am the daughter of cousins, a woman
with no children. I think of losing her in a crowd, slipping her
into someone’s jacket, an open bag, that sagging pocket
on the train, for her to live another life, our line travelling on.

A winner of the Poetry News Members' Poems Competition on the theme of 'Identity', judged by Eleanor Cooke. 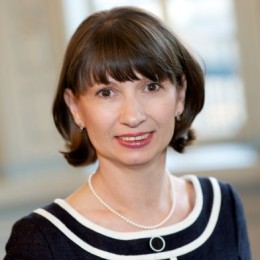 Allison McVety is the winner of the National Poetry Competition 2011. The Night Trotsky Came to Stay (Smith|Doorstop), her first collection, was shortlisted for a Forward Prize. A second, Miming Happiness, featuring work shortlisted for the Manchester Metropolitan Poetry Prize, was published in 2010, and her third, Lighthouses, in 2014. For many years an engineer, technical trainer and ITIL service manager at Microsoft, Allison left to manage a digital forensics company.