People in the neighborhood called him The Writer
because he loitered on certain corners for hours
at a stretch, making notations in pocket-sized
spiral notebooks. At all times of year he wore a dark
dirty overcoat. At no time did he interact
with passersby. The rumor went that he was
a Lebanese man who, either here in Brooklyn
or back in Lebanon, had lost his wife and children
to a house fire, which had driven him mad. He was tall,
thin and furtive. Nobody could glean what he ate
or where he slept. I thought perhaps he did neither,
having been transformed by grief into a surly
exempt essence needing nothing but an infinite
series of pages no larger than his palm
on which to record a repeating pattern of dots
and dashes – some morse of misery or misery
of remorse. One year, similar rows of dots
and dashes began to appear in fluorescent
marker on the front steps of people’s houses. Anxious
homeowner conversations ensued. It was the view
of some that the spooky but benign scribbling
had become a recognizable language –
that of revenge. The Writer was marking his targets.
He would arrive in the night with gasoline
and matches to take from others what had been taken
from him. But it was no such thing. There were no fires,
no raging explanations of what it was all about,
no confirmations or translations, just the dull
simmer of his continued solitary assessment,
as if he were the last man on earth – or the first. 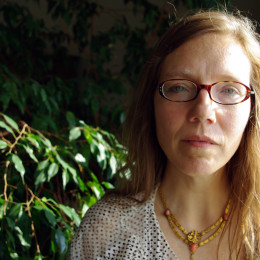