In Japan, in a laboratory in the hills, a man is whispering to water.
A man, whose wife has left him, is focusing on structure through
a powerful microscope. He’s astounded when each isolated drop
seems to listen, absorb the words, change like a face transformed
by smiling or a splash of shock. He studies how words like ‘family’
or ‘betrayal’ alter the crystalline mandala, as if the vibration
of his heart shakes and resets each miniscule aquatic form.
He mouths ‘eternity’ in Arabic and ‘goodbye’ in French and manages
to photograph the crystal as it clouds inside like a blown fuse. Now
others will believe him, will apply the knowledge he’s not built for,
why these lexigrams appear, as if water held the capacity of mind
and how minds change when love’s ear hears nothing anymore:
how different from the first unspoken, this last not speaking.
He’s tired. He doesn’t mean to murmur ‘mercy’. It’s almost a
forgotten word. The droplet he is viewing becomes a spiky lattice,
with a strange core, like the trapped blue-white sea of a cataract.
His vision softens. He asks mercy for himself, from himself, until
the mantra rises to a song from the southern shore his wife would sing,
a song of waves and Bo trees, whose words he’s no idea he knew,
and he sees the water tremble as if for the body that once carried it.
‘Forgive me’, he says. He photographs the feeling. 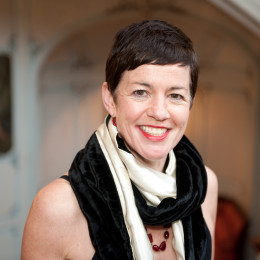 Cherry Smyth was commended in the National Poetry Competition 2009. She has published three collections: When the Lights Go Up (2001), One Wanted Thing (2006) and Test, Orange (2012). Her anthology of women prisoners’ writing won the Raymond Williams Community Publishing Award in 2003.