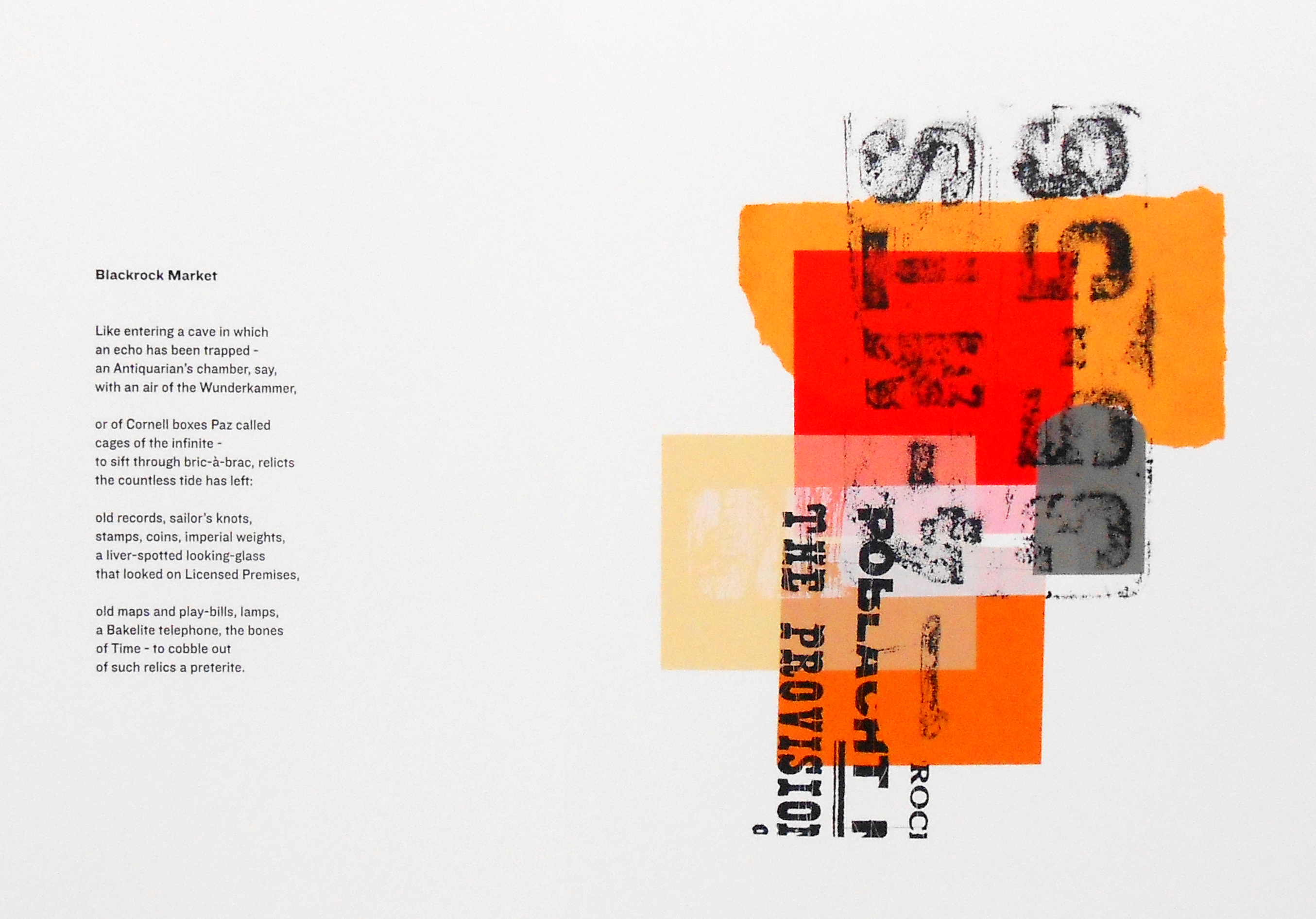 Blackrock Sequence is an award-winning collaboration of 11 screenprinted images and poems by writer David Butler and artist Jim Butler, exploring a stretch of Dublin coastline through poetry and printmaking.

In 2016, Dún Laoghaire / Rathdown County Council commissioned David to write poems exploring the culture, history and ecology of a stretch of suburban Dublin coastline, for which his brother Jim then produced a series of images acting in dialogue with the poems. The images were developed from collages and rubbings of incidental typography Jim made on location. Using screenprinting, Jim was particularly interested in the colours formed by overlapping layers. Each image uses a related palette of inks, though the print order and transparency is played with across the sequence to achieve different colours. The shapes of the straight and torn edges echo the shapes of the poems, while location-specific typography completes each image. The poems are set in Koefler’s Knockout typeface. Blackrock Sequence won the professional book category in the 2018 World Illustration Award and to date has been acquired by a number of artists’ book collections including the Tate, the British Library, National Irish Visual Arts Library, Yale University and Cambridge University.

“Blackrock Sequence is a fine example of the historical traditions of the livre d’artiste, delivered in a contemporary method of production with the artist acting as master printer and publisher. It showcases Butler’s sensitivity and skills in presenting visual form on the page.” – Sarah Bodman, Senior Research Fellow for Artists’ Books at the Centre for Fine Print Research

David Butler is a multi-award winning novelist, poet and playwright. The most recent of his three published novels, City of Dis (New Island), was shortlisted for the 2015 Kerry Group Irish Novel of the Year. His second poetry collection, All the Barbaric Glass, was published in 2017 by Doire Press, while a short-story collection, No Greater Love, was published in London by Ward Wood in 2013. Literary prizes include the Maria Edgeworth, ITT/Red Line and Fish International Award for the short story, the Scottish Community Drama, Cork Arts Theatre and British Theatre Challenge awards for drama, and the Féile Filíochta, Ted McNulty, Brendan Kennelly, Phizfest, Poetry Ireland/Trocaire and Baileborough awards for poetry. His radio play Vigil was broadcast by RTE in 2017. He lives in Bray, outside Dublin.

Jim Butler was born in Dublin and currently lives in Cambridge where he leads the MA Illustration & Book Arts course at Cambridge School of Art, Anglia Ruskin University. His practice is centred around drawing, collage and printmaking. He designs, prints and binds his books by hand. His work has been exhibited widely in the UK, Ireland, France, Belgium, Holland, Portugal, Mexico and the USA and is held in numerous public collections including the Tate, British Library, Huis van het Boek / Meermanno Museum and the National Irish Visual Arts Library. His illustration clients include Adidas, Siemens and New Island Books.

Join us for a celebratory event at The Poetry Café, London, with David and Jim Butler on Sat 4 May, 4–6pm – all welcome!

If you would like to receive regular updates about our exhibitions and all the other exciting events in The Poetry Café, just sign up.