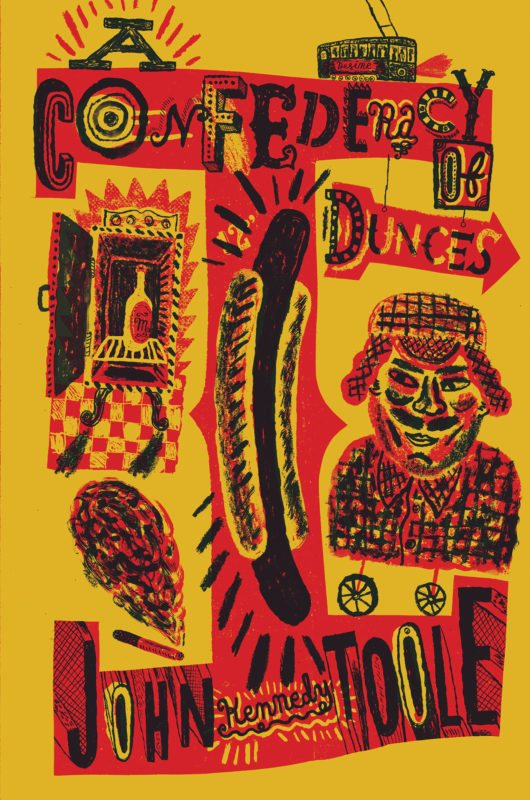 Earlier this year Jonny Hannah was commissioned by the Folio Society to illustrate the hilarious classic A Confederacy of Dunces by John Kennedy Toole. Having been commissioned twenty years ago by Penguin Books to produce a cover for the same book, he was delighted to be tackling this great volume once again and to be delving afresh into the bonkers world of Ignatius J. Reilly and the New Orleans he so clumsily inhabits.

Jonny Hannah’s exhibition will feature six paintings, one for each of the ridiculous main characters, and a brand new screenprint paying homage to the classic ‘Big Chief’ notebooks of yesteryear. Other pieces will include poetry related prints and paintings, and two of his Darktown Totems. O Fortuna…

About the artist
Jonny Hannah grew up in Dunfermline and studied illustration at Liverpool Art School and the Royal College of Art. He has been a freelance illustrator ever since, happily residing in Southampton, and is represented by the Heart Agency in London and New York.

As an obsessive fan of both popular and unpopular culture, he has been fortunate enough to be commissioned to draw, paint and collage his heroes, from Hot Jazz Special for Walker Books (2005), to exploring our folk hinterlands with the Curious Customs stamps for the Royal Mail (2019). And anyone else who inspires him often end up in an exhibition of one kind or another.

His biggest show to date was Main Street at Yorkshire Sculpture Park in 2015, for which he created a set of pop-up shops from his imaginary ‘Darktown’; a peninsula surrounded by the Sea of Possibilities, bringing much of his monograph, Greetings from Darktown (Merrell 2014), to life.

Jonny is also a keen printmaker and runs the ‘Cakes & Ale Press’, with Sharon Hannah, aka, the Queen of Darktown, a cottage industry publishing books, prints, posters, teatowels, badges and lovehearts.  Mare Vivimus.