by Alice Oswald and Chana Dubinski 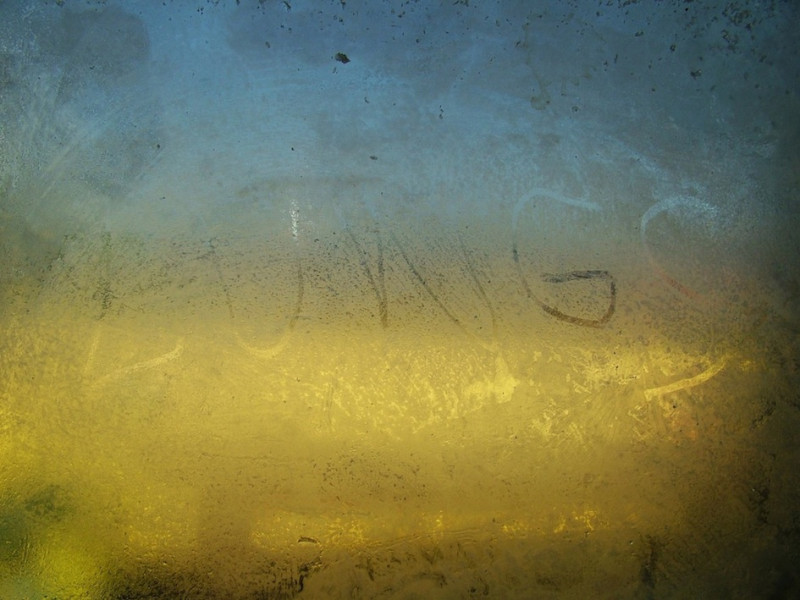 Interview with Chana Dubinski about Evaporations

How have you used text in your work before?

“In my current show A Transpective, currently showing in Venice, I have several works using texts, such as the sentence  ‘How things used to be now’  hand carved into marble and all the marble dust from this procedure is collected and placed in front of the marble block. There are texts on windows with dates and times of the moment the sun hit various windows over the year. There are texts of memories on the white sails of toy sailing boats placed on watery ponds situated in the bowl of weighing scales and more texts from childhood on the aprons of doll’s clothes. There are embroidered texts on cushions and a photographic work of a text on my belly done at a tattoo parlour as a stencil about putse flies burrowing into the skin. There are texts engraved into glass and also disintegrated texts boiled in saucepans”

What was it about the theme of ‘water’ that inspired you?

“When I was asked to collaborate with Alice Oswald and given the theme of water, my immediate sense was of my brain contemplating itself in terms of its own 99% water content. This was a strangely hermetic experience which later seemed to become explicit, especially resonating for me in the dictaphone  washing sequence where the dictaphones digital display was subsumed by the wash and became simply  a bubble of water. The water is now the machine’s cognition, the brain as thoughtful water. The words on  the dictaphone body – ENTER PAUSE PLAY RECORD FOLDER and MENU all take on a new correlation

Then it was Dew
Disclosing the cold in my mind
This was the exploration I was interested in; the mind as the tiny space in which all infinities, eternities and transience is processed. An awareness of the awareness of these chemical impressions within this watery mass – matter perceiving itself”

Why do you enjoy collaboration?

“Collaboration brings in a third unexpected presence that neither participant can anticipate in advance and shifts both into territories that neither would have reached or even reached for independently.”

What interests you about water and its different states?

“I once made labels for water that I used in several workshops to kick off ideas:

“All atoms of hydrogen throughout the Solar system are more than 13 billion years old. A way to feel the presence of these oldest atoms is to drink them as water, which has 2 atoms of hydrogen  for every molecule of water. We are mostly made of water, so most of our body is 13 billion years old. Within any glass of water several of these atoms would have once been inside a dinosaur.”

I have often worked with ice and steam and it still can astonish me that they are both different states of the same element. The numerous water words – rain, fog, snow, mist, vapour, clouds, hail, frost, condensation, dew, tears, evaporation – hold stillness/flow, hard/soft, presence/absence.”

The artist and writer, Chana Dubinski, was born 1950 in Zambia. She studied Fine Art in England and South Africa. She is currently showing at the Whitechapel Gallery, as part of the Acme Archives, a work called Weighting 1979, which was a large-scale piece taking up the entire two floors of the Gallery. She had, since then and until last year, been deliberately working privately without public exposure of her creative practice. Now, she has started again exploring a public presence. During 2012 she won the Mabel Barbour prize for Creative Writing and her work, Something told me it was over, was part of Friction International Festival in Uppsala, Sweden where the French poststructuralist philosopher Michel Foucault had spent several years. Many of Foucault’s concerns are pertinent to her current explorations, such as: “Do not ask who I am and do not ask me to remain the same: leave it to our bureaucrats and our police to see that our papers are in order. At least spare us their morality when we write” Currently she has a major show in Venice called A Transpective created during 2012, first shown in Newark, Notts.