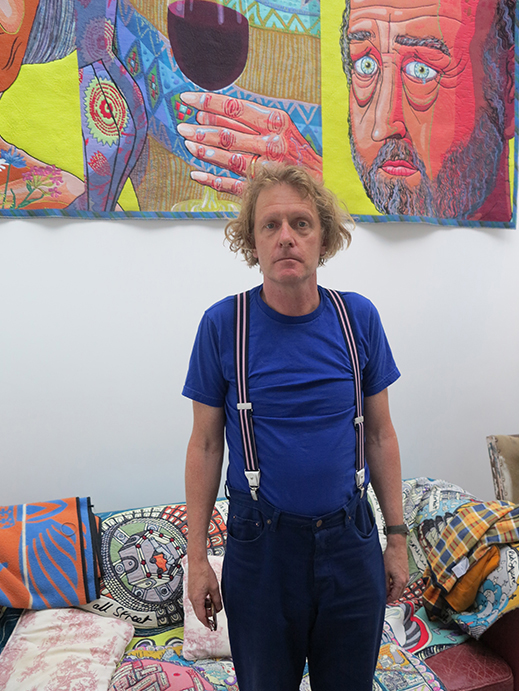 Grayson Perry in his studio. © The Poetry Society

Grayson Perry, Turner Prize winner and Ted Hughes Award judge, has poetry on his iPod and has just penned a 3000-word poem. Mike Sims is impressed

“Factory” is crossed out: no Warholian workforce toiling here, only Perry smilingly unhooking the gate after I’ve pressed the buzzer.

After we’ve settled down with mugs of tea to discuss the Ted Hughes Award 2014, which he is judging alongside Julia Copus and Kei Miller, I discover poetry – and biography – are very much in his mind. Not least because he has recently completed a 3,000-word biographical poem.

I must have looked surprised.

“I’m doing this house with a company called Living Architecture, which gets architects to design houses that are then rented out – a bit like a modern version of the Landmark Trust. Years ago, I was chatting to Alain de Botton, saying how I’d always wanted to build a church, and he was very enthusiastic. So, having helped set up Living Architecture, he came back and said why don’t we do it as a house? And that’s what we’ve done: a house as chapel, in Essex, beautifully designed by Charles Holland.

“I decided this building had to have a rationale, a narrative. There’s nothing I hate more than a vaguely spiritual idea – one of the things I like most about religion is that it has very specific stories. And I thought, okay, this chapel is going to be dedicated to an individual. So I invented someone called Julie, born in 1953, and sketched out a biography for her.”

A giant poem to Julie

A giant Julie, glass of red wine in hand, gazes down at us from the studio wall, in a test panel for one of the tapestries that will hang in the house.

“And I thought how am I going to nail this? Well, I was reading one of my Larkin books at the time and I thought I’m going to write a poem of Julie’s life. So that’s what I’ve done: a long, biographical poem, from birth to death. It’s a kind of guide to the building – a wee book about what is a very ordinary life in many ways but with that combination of grandeur and the mundane that I find most touching in culture.”

Gosh, I say. So, did you enjoy writing the poem? Did it develop very naturally?

“I think that’s the only way – not to agonise. I did change the rhythm – I started out with eight syllables, four beats, then I decided to go for iambic pentameter. It’ll be published when the house is finished but I haven’t shown it to many people yet. Of all the things I’ve done in my life it’s the first thing I’ve felt so self-conscious about in a long time.”

I become greedy for more poetry surprises: what about all those Philip Larkin books, I ask.

“Like many embittered men of my age, I’m heavily into Larkin; it is men on the whole who like Larkin. I keep his Collected Poems beside the bed. I like the famous ones: the “arrow-shower” in the final stanza of ‘The Whitsun Weddings’ is amazing; I love the idea of this mundane train journey taken into the epic. His poems are incredibly poignant, so bitter-sweet, aren’t they? He’s the most loved of late twentieth-century poets because he embodies the emotional constipation of the English male, at the same time as being the most poignant of late twentieth-century poets. That’s why he’s such an icon – technically sophisticated at the same time as being a bit –”

“Mawkish! That’s why I’d read a poem, to be mawkish! Crikey, I’m not interested in a poem as a technical exercise or for its literary references. I’m most interested in being taken along for the emotional ride.”

Is that what he’ll be looking for as a Ted Hughes Award judge?

“My role is to represent the interested person on the street. But, yes, choosing a winner will be an emotional decision for me: does the work engage me? Does it hit me in the heart? The best poetry tickles you, then sucker-punches you, which is what I try to do in my work. Though I think humour gets a bad rap – people often think that poetry has to be about our deepest feelings. Without humour, your vision is skewed. You have to have both: hilarious and heart-breaking.”

Perry is looking forward to multimedia possibilities of the Ted Hughes Award. He likes poetry as sound: “I’ve loads of poetry on the iPod. Mine’s always on ‘shuffle’, so it’ll be moany teen rock or classical, then suddenly up will pop Larkin or Robert Lowell. I love how you can be walking down the street with it on and all these amazing connections come pinging off.” He likes poetry on film: “Humphry Jennings’s The Night Mail really got me into poetry and I love all Betjeman’s poem films. I’d go to the cinema and watch an hour and a half of poetry tracked to images. In fact, I’d like to make that film.”

Great art works obliquely. “You make the subtext and allow the audience to put everything together – you almost bury what the work is about. Alan Bennett said something along the lines of seeing all his best ideas out of the corner of his eye. You can find yourself really affected by a poem and you don’t quite know what it is – later, you realise it’s the truth of it: the truth in a line that we all respond to, the truth that we are on the brink of realising. And the freshness of the truth is the thing that strikes us.”

The kiln ticks and buzzes away behind us like a wonky metronome, and we end by talking about the wide variety of mediums in which he works – ceramics, sculpture, printmaking, textiles – and how ideas develop. Perry suggests that the mediums offer both opportunities and constraints in ways that poets will appreciate: “Craft is good because it allows you to concentrate on the technical aspect, to get in the flow, while allowing the heavier shit to happen more naturally. But I find I have to pulse in and out of the two ways of thinking: plot out the ground for the next few miles, dash, stop, look at the map, dash again…”

What art isn’t about, he says, is universalising platitudes – it is about Blake’s “minute particulars”. “One word that strikes fear into my love of culture is ‘globalisation’ and one of my favourite quotes from W.H. Auden is: ‘A poet’s hope: to be, like some valley cheese, local, but prized elsewhere’ – I’ve lived by that one.” Prized local cheese to win the Ted Hughes Award then…

The shortlist for Ted Hughes Award 2014 has now been published. The winner is announced on 2nd April 2015.

This article was first published in Poetry News, Winter 2014/5. © The Poetry Society.