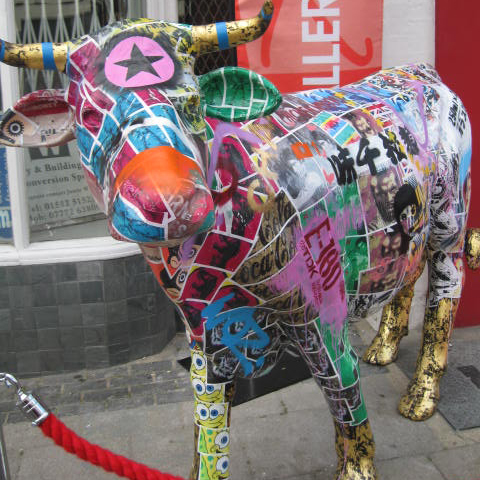 The poem ‘Love Cow’ is special to me, and I’m thrilled to have it find a resting place – or byre – in The Poetry Review.

The opening four lines were in my head when I woke up one day – a familiar if unsettling experience, maybe after some late night talking or reading or worrying. I developed them with the deliberate intention of writing more loosely, in response to a prompt to break a few rules. For example, I tried not to restrain myself from being wantonly adjectival and adverbial – ‘prosy’.

When asked to comment on the poem, I initially doubted my ability to disentangle any individual strands – the Love Cow had emerged whole from the marsh of my (weird) subconscious. But, as with dreams, when certain elements can be traced back to a half-registered image from the previous day, some fleeting or abiding older memory, or midnight cheese (or beef), I realise that I’m able to pinpoint the provenance of quite a few lines.

For instance, the “I have a disease” line came from a girls’ magazine read long ago, in an article offering suggestions on how to deter an attacker. And, with a bit of adaptation to the creature in hand, the “rump” line, also…

If I’m in analytic mode, I can see that the name Libbie gives a nod to liberty/liberal.

Likewise, the phrases “brown stare” and “How I wobble now before you, cow…” reference, perhaps unsubtly, the elocution drill of How Now, Brown Cow.

The lines about letting go of the dog came almost verbatim (the first version, even prosier, even ‘more’ verbatim: ‘always let go of the dog if cows surround you’) from a Yorkshire Dales National Park notice in the public loos in the picturesque village of Kettlewell.

The abattoir was a memory from a teenage trip to Belgium when I fell in with a group of agricultural students and joined in the rest of their itinerary. I have never been able to obliterate the memory of massive cow carcasses steaming on hooks. Also, one of my uncles used to slaughter cows and sheep (many of which he’d raised) in a little building behind the village butcher’s shop above which he and his family lived – I have vivid memories of blood trickling down the slaughterhouse steps just outside his back door. And the horrific fact about certain meats remaining in the gut for six months or more (sorry) is a truth averred by those who discuss such things, in this case, I think, a German expert on the gut. All of which memories regularly nudge me towards vegetarianism.

I leaned more grossly on repetition and wordplay than I would do normally – pressed/press/fenced/defending/defenceless/staked out – as the Cow’s personality seemed to demand it.

The whole thing exists in a kind of Irish hue for me, a kind of Celtic daylight, as it were. And the “sloping fields” and “a faraway sea” are specific and autobiographical, so much so, they hurt – the fields and sweeping Atlantic facing my father’s cottage, in the wild west of Ireland.

‘Love Cow’ by Geraldine Clarkson is published in The Poetry Review, Vol. 105, No. 2.

Geraldine Clarkson will be reading, with Daljit Nagra and Zaffar Kunial, at the launch of the summer issue at the London Review Bookshop, London, Thursday 2 July, 7-9pm.