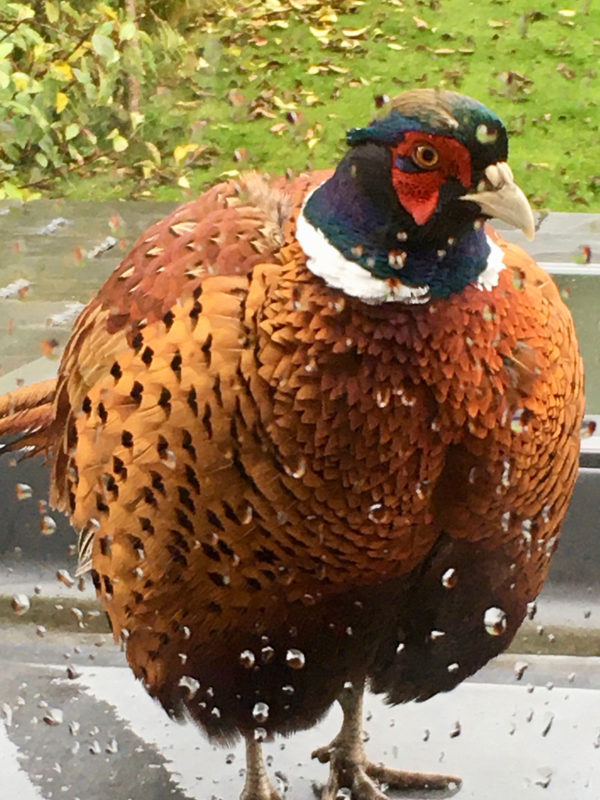 I knew he was – would become – a poem as soon as I set eyes on him. That unmistakeable aura, the bristling forcefield of the imaginary, the dazzle of semiotic refractions that imbue the verifiable with the mythological.

Our garden slopes to a small valley: ash and hawthorn, a ruined barn, grazing sheep, a treeline, the flat-topped mass of Ingleborough. Below my study, a slate roof, dwarf apple trees, a greenhouse, vegetable beds, the sunken pond where herons kill our fish at dawn.

In spring, he appeared from a neighbour’s hedge, bustling towards the greenhouse with a furious, head-down gait, confronting his arch rival reflected there. He’d peck at our kitchen window, making the double-glazing vibrate. He’d appear on the roof to peer in at me as I worked, just inches away. He seemed anxious in those days, fugitive, haunted by that other self who fascinated him and who he seemed to fear.

By August he was in bad shape. Dull plumage, broken tail feathers, visibly despondent. I was sure he’d die of whatever terrors were consuming him. He disappeared for a time and then reappeared, resplendent in winter plumage, glossy, assured, leading two hen pheasants into the garden as if he’d come into his own.

Wild creatures both invite and resist anthropomorphism. When language attends to them they are limed in words that simultaneously reveal and occlude them. They exist as denizens of our perceptions. The effort to describe, remember, catalogue, contextualise, snares the onlooker in their own subjectivities. Wild creatures have irreducible quiddity. So do we – a species whose needs, beliefs and anxieties generate the world.

Maybe that’s reflected in the nature of poetry: a multivalent medium that both instals and subverts its own terms of reference, existing as reflective consciousness and inchoate substrate, faltering towards evanescent truths through its very evasions and inadequacies.

I’m thinking this and he’s heading up the garden, gorgeously attired, stepping into the ritual of my attention. The mountain disappears behind basalt cloud. My hands stutter on the keyboard. He gazes at me so… inexpressibly. Him. Me. Us. Now why is he shaking his head?

Graham Mort’s ‘Cock Pheasant’ is published in the winter 2020 issue of The Poetry Review, Vol. 110, No. 4. Graham is among the readers at the online launch of the issue – visit our event page to book.