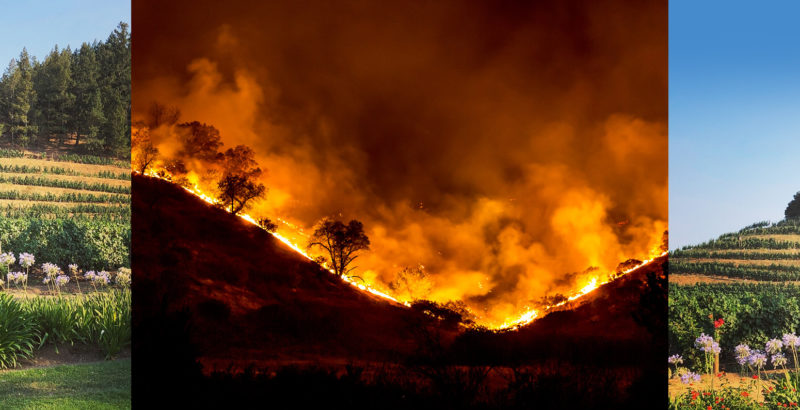 I started to write this poem at a wine and gourmet burger stand in California’s wine country. I was in the area for the Napa Valley Writer’s Conference. I’d been to Napa and the rest of wine country a few times, as I lived just across the Golden Gate Bridge, in San Francisco, but I’d never spent a full, mostly sober, week there.

The year I attended the conference, 2018, was the year after the worst wildfires I lived through in the Bay Area. It was the year I’d routinely open my car door to ash, falling from the handle to my toes. I remember scorched powder trails and continually having to sweep up the ash I was tracking back to my house.

The house was across from Golden Gate Park, where the fog would settle, blanketing us from the nearby smolder most nights. Living by the bridge meant I could drastically change my microclimate with a ten-minute drive north. Every time I crossed over the burnt-red bridge to Marin, it felt like I was out-driving the grey and fog for a land 20 degrees (Fahrenheit) warmer. Cross the county line and, boom, all of a sudden searing sun – like I got on the bridge in London and exited in Los Angeles.

The road between my accommodation in Napa and the conference in St. Helena was called the Silverado Trail. It was a two-lane road flanked by expansive fields. White stalks shot out from the ground and, upon first gaze, I thought I was looking at newly planted graves. I asked a classmate about the eerie path and she explained that the “graveyards” were actually wine plantations.

I remembered reading an article about the fires’ residue and ash and how we were ingesting all that had burned, including the people who couldn’t escape the flames in time. I remembered a city named Paradise being hit unusually hard, and I remember the president thoughtlessly calling the city Pleasure. I imagined the hands of the field workers picking the grapes, as well as the hands of some of the people who owned the plantations pulling (an antiquated, imagined) lever to put the aforementioned president in power. I thought of microcosms and how strange, conflicting, toxic, gorgeous, and harsh this ecosystem was; then I thought, Jesus, if this isn’t America.

Kimberly Reyes’s ‘a constitution’ is published in the Autumn 2020 issue of The Poetry Review, Vol. 110, No. 3. Kimberly is among the readers at the online launch of the issue – visit our event page to book.