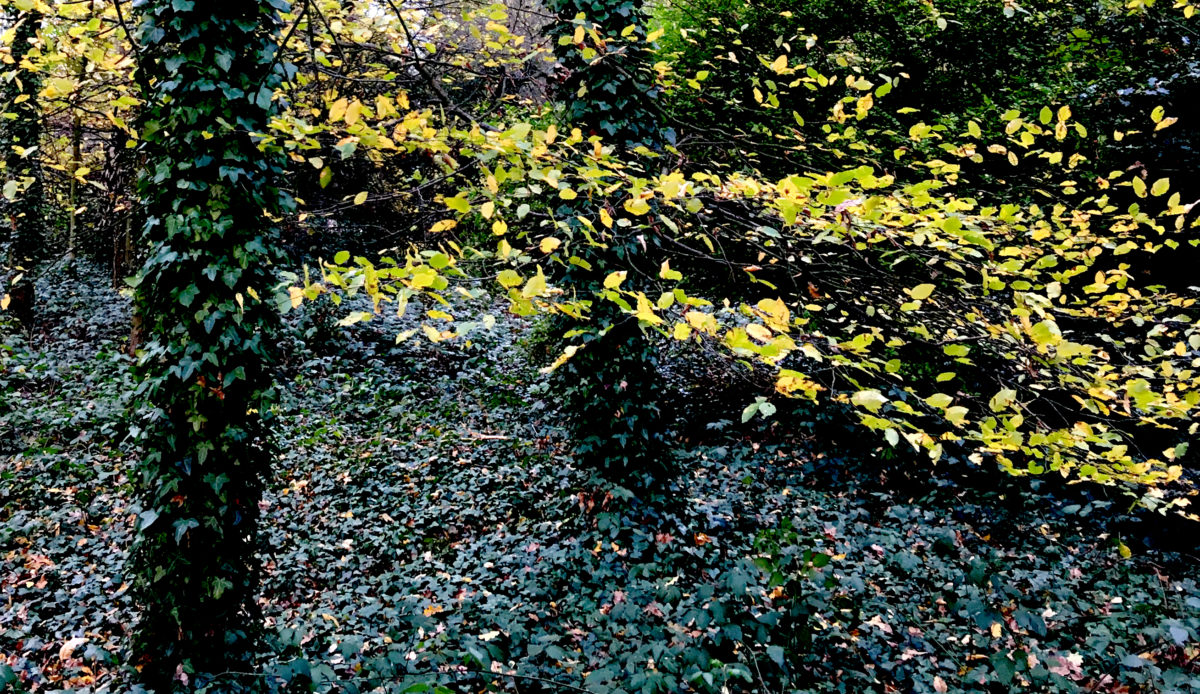 Consider the title. An epithalamium is an old type of poem written for the threshold of the marital chamber. We thus expect a poem about love, marriage, and sex (though not necessarily in that chaste order).

Yet, from the first stanza Hewitt upends expectations, signaling his epithalamium is going to take us down a different path from that travelled by Sappho, Catullus, Spenser, and company. Velvet might plausibly be found at a wedding, but certainly not woodlice, fungi, or battered vegetation. We find ourselves in forest, though not the idyll of A Midsummer Night’s Dream (itself possibly the ultimate epithalamium). Here, we are concerned with one small moment, a discrete point of contact between a narrator and a tree.

For all that moment’s simplicity, our sense of what is happening is very much like the image of the oak that comes next: “All its shelves / are sinking – the spread of layers // like tar poured and set and now, / again, melting into the soil –”. By this point it is clear this is how text and subtext will interact with one another in this piece. Its multiple senses and its politics will be knotted then unknotted, unraveled then put back together again by the cognition of a reader moved to unearth newer and newer readings.

Of what? Wood is phallic. In this poem, beneath the “war-burnt” and “blistered” body of the weathered tree, is a “peeling back to the soft heart – // a tumour on the wood” which, once encountered, leads the narrator to exclaim: “I can hardly / bear to touch it – shaking at first, then // stroking it, patting it, kneeling down / and suddenly the tears”.

In Hewitt’s poetry, woodlands are correlative with gay desire, nature being an authentic force within, as well as a safe space for same-sex expressions. In the sequence ‘from Buile Suibhne’, extracts of which were published in an earlier issue of The Poetry Review, Suibhne finds a male soul mate who tells him: “Let us never sleep / more than two trees apart”. Elsewhere, in the poem ‘Dryad’, a narrator speaks of “kneeling and being knelt for / in acts of secret worship, and now / each woodland smells quietly of sex” (kneeling being a posture of both submission and active supplication). In ‘October’, a narrator similarly kneels in a garden while staring at marrow flowers and is, in the process, “caught between / one man I no longer love, / another I might never”. In ‘Adoration’, another narrator kneels and declares: “Leave me always / in these waste spaces, where / my head is tilted up to God.”

In all of this, there is a whiff of Thom Gunn and maybe Pablo Neruda, with branches extending back to Gerard Manley Hopkins (who makes an appearance in Hewitt’s poem ‘Vestiges’, published alongside this one on the right-hand page), Walt Whitman and the Romantics. I even think of D.H. Lawrence’s novel Women in Love and its men with “limbs like smooth plant-stems”. But Hewitt’s poem is uniquely charged by multiple estrangements.

Very much like American poet Phillip B. Williams’ ‘Epithalamium’, this poem asks readers to reconsider what is meant by ‘marriage’. The solitude of Hewitt’s narrator is part and parcel with the isolation that often accompanies the queer in a heteronormative society. The irruption of a memory or telepathic sense of a loved one (“and this, / I know, is your palm, upturned for mine”) marks the poem shifting from a scale that is introspective to one that is extrospective. Why are these lovers estranged?

Same-sex marriage is now legal in the UK, but with a simple act of parliament that might easily be rolled back, as have previous human rights laws. Additionally, many Commonwealth countries remain governed by British colonial edicts left in place after independence, and in these realms an overly narrow definition of marriage sets the tone for a greater violence against equality across the statute books.

Other layers are discernable. The reference to a “tumour” and the playful teasing of parents singing nuptial hymns, suggest a loss, possibly by cancer, of a childhood figure, a figure who may or may not be relevant to the narrator’s sexuality. The comma in the poem’s last line axes a single life in two, mirroring the momentous nature of several fractures.

The poem is thus freighted with enough to allow us to safely suggest it is about broken things: a broken contract between lovers; the broken contract between society and the environment amid the climate crisis; and the broken social contract between citizens and state – a contract that bestows power on rulers in exchange for the advancement of the greater good. Those seeking communion with what nature bestows are disappointed and, in yet another broken accord, will be unable to leave anything behind for generations to come. Those generations, the poem suggests, may receive from parents a dual inheritance: the poisoned chalice of a world burnt by fire, as well as a place in which systems of oppression threaten to make a fierce comeback.

Such leaps of interpretation, I believe, are not precluded by the poet’s own viewpoints, as suggested in his recent book-length study J. M. Synge: Nature, Politics, Modernism (2020), whose very title shows sympathy for the idea of a synthesis between environment, politics and the contemporary within literature.

“Through nature everything else comes,” Hewitt said at an online event with the poets Kostya Tsolakis and Mícheál McCann in April 2021.

By this breathtaking poem’s end, we have journeyed from a limited notion of the epithalamium, with all its historic suggestions of heterosexualist hegemony, female chastity and patriarchal ownership, to the wider project of literature itself, a project of protest and reimagination, alongside agnostic reflection. Too late do we realise that this work, its nightmarish vision of hope lost among the weeds, is not just an epithalamium. It is an elegy for something that never was. 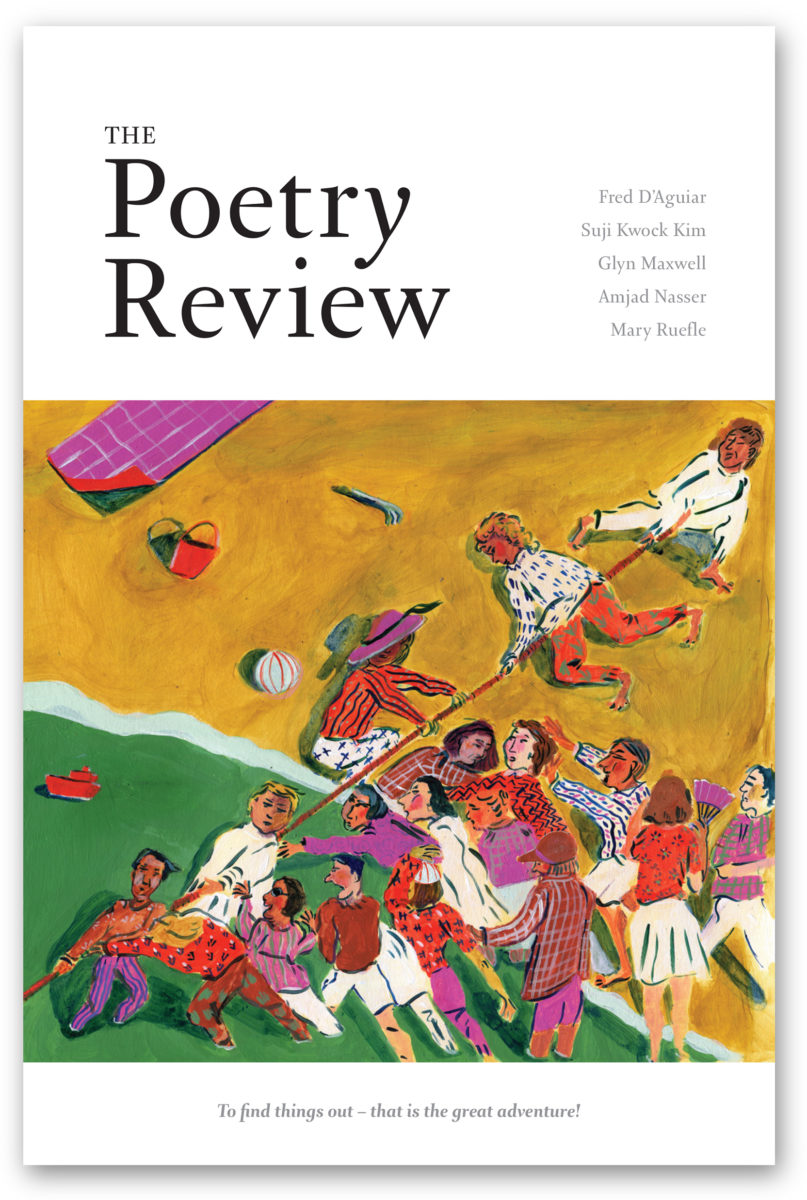 Seán Hewitt’s poem ‘Epithalamium’, first published in the Summer 2019 issue of The Poetry Review, Vo1. 109, No. 2, can also be read online. Andre Bagoo’s essay collection The Undiscovered Country is published by Peepal Tree.