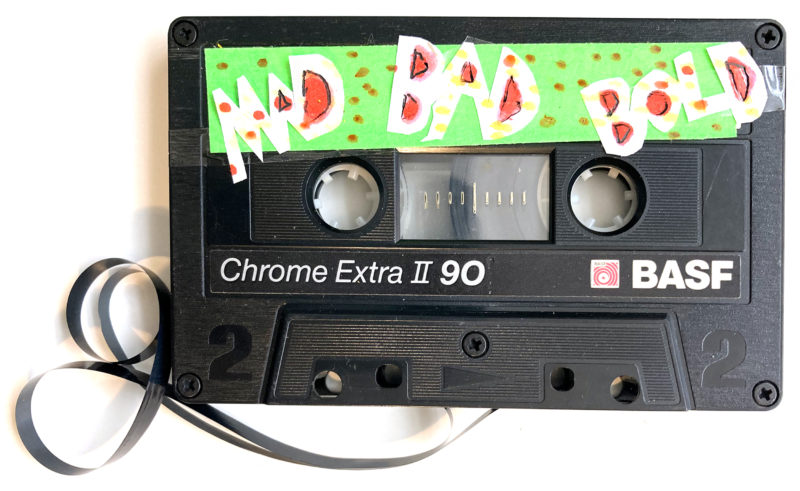 Before I got Covid-19 this summer, I was in the middle of a huge clear-out and came across some of the mixtapes friends had made me. Seeing the handwriting of my childhood best friend, Shak, I was reminded of the intensity of female friendship during the teen years; spending hours on the phone in the evenings, the letters and cards we’d write, the endless conversations about the latest crush or family drama. I thought also of how the books we read or music we listened to fed the formation of our selves and helped us make sense of new desires that were unfurling. I feel almost sorry for us and the paucity of the materials that made us.

When I was asked to put together this selection for The Poetry Review, I remembered Shak, and went back up to my attic, but I can’t find her mixtapes now. Did I throw them out? I might have. I was determined to purge my space of all the objects I’d weighted life down with. Shak would understand; she’s from a Sufi background and would find some virtue in destroying the cassette tape and keeping the music in one’s heart (to paraphrase a metaphor in my first pick).

1. Abida Parveen singing the kalam of Bulleh Shah. In desi cultures, music and poetry go hand in hand. Sufi mystic Bulleh Shah lived in the seventeenth century, but his Punjabi language poems are still performed by contemporary singers and enjoy huge popularity across the sub-continent. At a time when Muslims online can’t really escape the bigotry of Hindutva trolls, there’s something hopeful and heartening about seeing Hindus and Sikhs from India express a sense of kinship with Pakistani Muslims across the border through a shared appreciation of Sufi poetry and song. I’m no optimist but there is undeniable power in great art, sometimes its beauty and truth cuts through our ugliness and falsehoods.

2. Truth, and proclaiming it, is always dangerous though – particularly when the balance of power is in favour of those who find the truth inconvenient or simply lack the perception to understand it. When the Sufi mystic Hallaj uttered in ecstatic poetry, “I am the Truth”, it was interpreted as a heretical statement, a claim to divinity, when it was an expression of gnosis and annihilation of the self in the knowledge of god. Matthew Arnold wrote, “Some secrets may the poet tell / For the world loves new ways / To tell too deep ones is not well – / It knows not what he says”, and centuries before him, Junayd al-Baghdadi had given Hallaj a similar warning. Hallaj was executed on the pretext of some different heresy – thought crimes being a precursor to other sorts of crimes. Martin Lings, the English convert and scholar who wrote on Sufism and Shakespeare, translates some verses from Hallaj in his anthology Sufi Poems (2004). Here’s another poem from the book; clunky, anastrophic in Lings’ English rendering, Ibn al-Farid’s ‘The Wine Song’ is still worth listening to in Arabic.

3. Since I’m contemplating truth and heresy while in the throes of PMDD, it makes sense that the Scottish spoken word poet Jenny Lindsay’s poem, ‘The Imagined We’, should come to mind. It appears in her collection This Script (2019) and is presented here as a film in collaboration with Perry Jonsson, Biff Smith, and Kevin McLean. The film won the 2020 John Byrne Award for Critical Thinking. Lindsay considers, among other things, the pressure on women – and perhaps spoken word artists in particular – for a poetics of trauma and political activism; the toll this takes; the ways in which it flattens, narrows, and forces certain ways of making meaning, creating work, or parsing experiences.

4. Good women are supposed to reframe and repackage their trauma to make it digestible for audiences; but what of bad women? Birmingham poet Rupinder Kaur explores some of the arbitrary patriarchal thresholds women might cross to find themselves branded a “Buri Aurat”. You can listen to her Punjabi language list poem here. I only wish it were longer – we know the list could go on (and on) and she reads beautifully. Rupinder’s poem begins, “A free-thinking woman / is always a rebel to society”, and ends, “If she lifts a pen in her hand, that’s okay / but if she writes her true story, then she becomes a bad woman”. A bad woman refuses to centre the feelings of men in her life choices, her language, her work, her ways of seeing and thinking, and patriarchal society ostracises and punishes her for it. I always think it’s worth attuning one’s ears to the bad women writing from the margins.

5. Of course, bad women are invariably mad women. I’m thinking now of Sandra Gilbert and Susan Gubar’s book and that in turn reminds me of Marge Piercy’s feminist classic Woman on the Edge of Time (1976), whose protagonist Connie is unjustly committed to a mental hospital and experimented on against her will. Women who revolt against male oppression must be insane. The book confronts Connie with visions of a utopian future that’s socially just and technologically advanced, where babies are grown in artificial devices and raised by three parents so that women, collectively, are as freed as possible from the traditional bodily demands of childbearing and social institutions like marriage; the world both fascinates and disturbs Connie. It makes me wonder why it’s easier to imagine an egalitarian society where women no longer get pregnant and nurse their own babies – where they must necessarily be detached from the reproductive, creative, capabilities of their bodies – than it is to imagine one where they continue to do so as equal citizens rather than a systemically oppressed class. Piercy is prolific as a novelist and a poet and I have a soft spot for this love poem from her book The Moon is Always Female (1980).

6. From one kind of institutional internment to another. The Syrian poet Dua al Bostani al Fattohi writes in both Arabic and English and her poem in the third issue of digital poetry magazine Bad Lilies explores the figure of the imprisoned woman, taking inspiration from the Egyptian political prisoner Inji Efflatoun’s painting, Dreams of the Detainee.

7. In Threa Almontaser’s ‘Portrait with this Country’ dreams are simply another means of surveillance for the all-seeing prison warden. Women’s freedom is contested across countries and cultures, threatened by malicious actors outside the home and overbearing loved ones inside it. The poem appears in Almontaser’s debut, The Wild Fox of Yemen – one of this year’s standout collections. Almontaser’s nib is steely and sharp; steady your hand and take your time.

According to Islamic tradition, god loves odd numbers, and seven is a number that seems to crop up a lot, so this seems an auspicious place to end my mixtape. Part of the pleasure in mixtapes is the ritual of hitting rewind and replay; in becoming so familiar with it that one song primes you for the next, their music linked, now part of a longer composition that allows you to access a particular place in your emotional landscape. When I replay these, I’ll be thinking about how seekers, lovers, and women are bound by their defiance and the madness society characterises them with. Bulleh Shah said if being bathed and washed brought one closer to god, fish and frogs would be closest – externalised ritual compliance is the husk, not the core. If one was to set out in search of the Divine, I’d suggest starting among the bad, mad women of the world, so if god isn’t to be found, at least there will be good company, poems, and music; perhaps that’s the closest we can get.

Naush Sabah’s pamphlet Litanies is forthcoming with Guillemot Press in November. She is co-founder and editor of Poetry Birmingham.