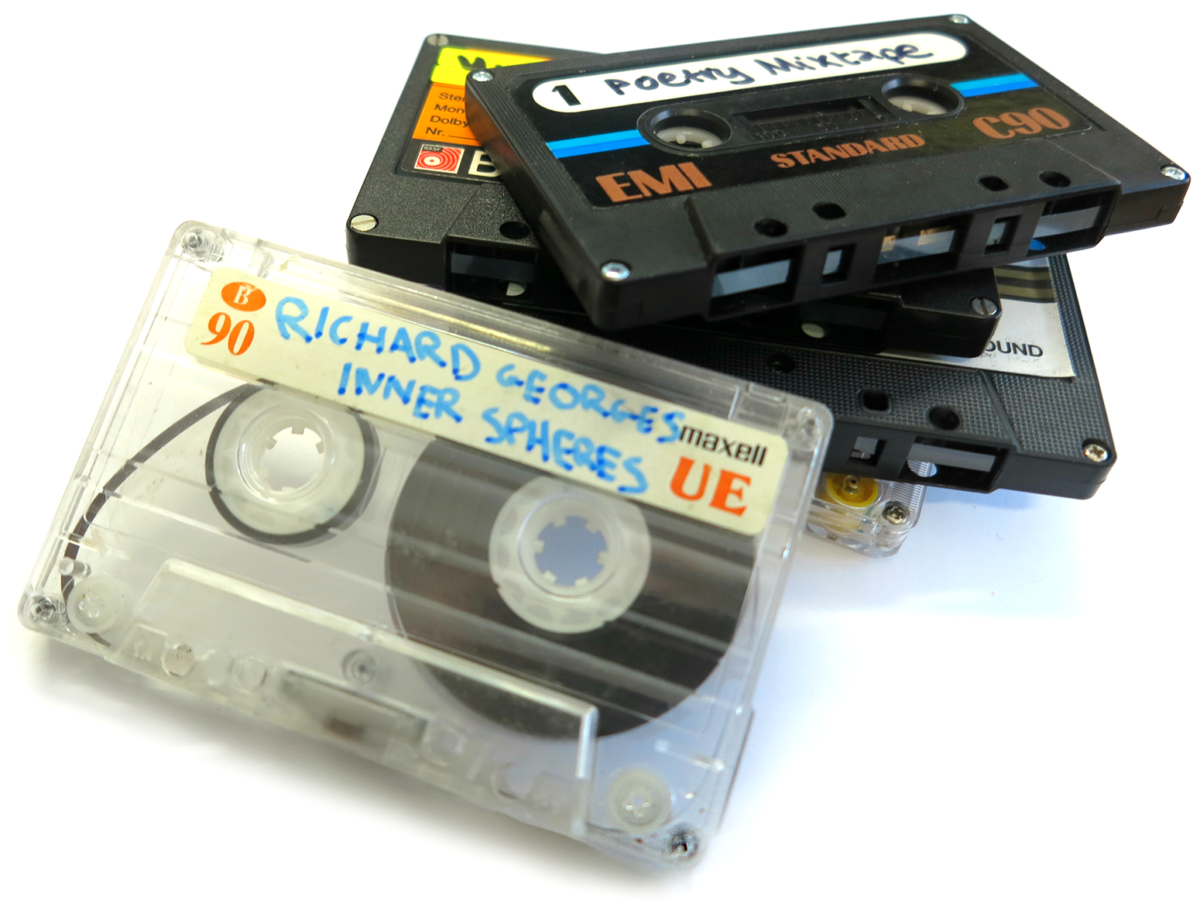 Richard Georges’ poems ‘On Remembering, or Dreams of Remembering’ and ‘Too Full of Vermouth and Cigarette Smoke’ appeared in The Poetry Review, Volume 107, No 4, Winter 2017.

My wife recently gave birth to our third daughter, so unsurprisingly parentage features heavily in my mixtape.

I especially love to hear Hayden reading, a somewhat monotone but simultaneously earnest, and therefore impassioned rendition that illustrates the ways we come to know how the many unseen labours of parents demonstrate a religious devotion to their children. As a father myself, and having a father who performed similar unseen loves during my childhood, this poem resonates deeply.

The poet’s father fades in and out of the poem as a sort of guide figure for the poet, while at the same time, Jamaican British is a rare feat – a poem that is striking powerful on the stage and echoes loudly on the page.

This is an epistle/elegy to his father, unnerving and uncomfortable in its revelation of the man’s inner life, but concurrently a triumphant portrait of human complexity.

Chan is a very special poet, as can be seen with her poem ‘//’, which was recently shortlisted for the Forward Prize for Best Single Poem. This poem here is one of her best. It appears alongside itself in Chinese and ends in devastating fashion.

Readers of Phillips will recognize that he is a master of form and a lover of language. This poem in eight tightly constructed stanzas captures the poet’s journey up the Pacific Coast Highway in California and the “old hocus of this ocean’s focus”.

Brand’s a mastermind. I don’t know what else to say here but to quote the following as proof:

would I have had a different life
failing this embrace with broken things,
iridescent veins, ecstatic bullets, small cracks
in the brain, would I know these particular facts,
how a phrase scars a cheek, how water
dries love out, this, a thought as casual
as any second eviscerates a breath

My friend David Knight Jr and I started Moko magazine in 2013 to publish emerging Caribbean writers and artists. We were utterly blessed to have Danielle Boodoo-Fortune as one of our first contributors with this powerful sequence that creates a fantastic reality within which to tell a deeply personal story.

Ramlochan’s work has always haunted. She is able to peel away at a poem, so that no embellishments or flourishes appear to remain, and all that is left is this naked work. It is really all that we need, and it makes for poems that make you shudder.

I first heard Howe read this at the International Literature Showcase last year. Howe turns into a performance poet, a storyteller, as she recites this by heart. The audience feels wrapped up in this legend, this fairy tale, even as it is dismantled and turned on its head for its heartbreaking conclusion.

Nguyen often writes about the psychological and emotional ramifications of weight and body image, and does so in a way that dismantles any perceived barriers between honesty and craft.

Richard Georges is a writer, editor, and lecturer in the British Virgin Islands.

His poems have appeared or are due to appear in Prelude, Smartish Pace, Barrelhouse, The Caribbean Writer, The Puritan, The Poetry Review, WILDNESS, Wasafiri, decomP, The Rusty Toque, Baldhip, Susumba, Under the Radar, sx salon, those that this, Cordite Poetry Review, The 2018 Forward Book of Poetry and elsewhere.

Richard is the author of the poetry collections Make Us All Islands (Shearsman Books) and the forthcoming GIANT (Platypus Press). He is the recipient of the 2016 Marvin E. Williams Literary Prize from The Caribbean Writer, and has been shortlisted for The Wasafiri New Writing Prize, The Small Axe Literary Prize, The Hollick Arvon Prize for Caribbean Literature, and the Forward Prize for Best First Collection.