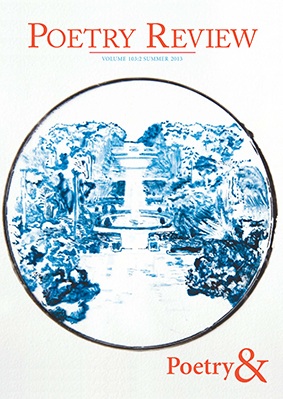 “This issue is about connections (between poetry and politics, fiction, translation, photography, technology, history…), and includes a spread of languages, places, genres, cultures, poetic practices and critical perspectives. At the same time, I hope to suggest that what gave the debates in the poetry culture of the seventies, eighties and nineties their bite and their urgency was exactly that sense of connectedness: that by talking about poetry you were also talking about other things, and that by talking about other things you might feel your way (back) to talking about poetry. ”

Our Guest Editor Patrick McGuinness and contributor Sam Willetts explore what poetry stands for and whether it should stand for anything anyway, Sam considers the authenticity and legitimacy of poetry and how craft, for him at least, helps validate what he does. He also gives a brilliant reading of poem, ‘The Bemusement Arcade’.

Essays
Sasha Dugdale on poetry translation
K.J. Orr on crossing boundaries: poetry and the short story
Sandeep Parmar on British women Modernist poets
Gilles Ortlieb on poetry and the peculiarity of train travel
Daisy Fried on the suspension of distaste
Gwyneth Lewis on R.S. Thomas at the centenary of his birth