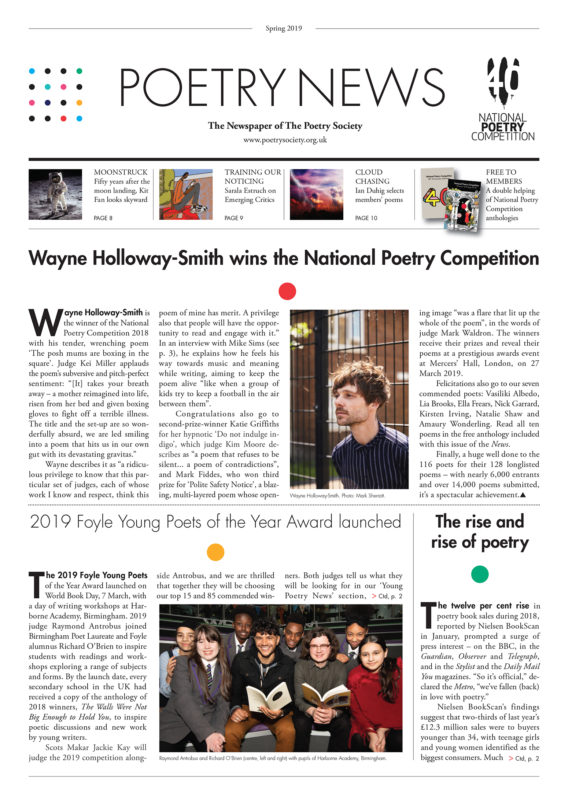 Wayne Holloway-Smith is the winner of the National Poetry Competition with his heart-rending and mending ‘The posh mums are boxing in the square’. We interview Wayne about what he describes as “a ridiculous privilege” to have had his poem chosen and his approach to writing poetry: “like when a group of kids try to keep a football in the air between them”.

The Foyle Young Poets of the Year Award 2019 was launched on World Book Day, 7 March, in Harborne Academy, Birmingham, with Raymond Antrobus (co-judging the competition with Jackie Kay) and Birmingham Poet Laureate Richard O’Brien. Mark Oakley, Ted Hughes Award judge with Linton Kwesi Johnson and Clare Shaw, presents this year’s shortlist. We report on rising poetry book sales, the return of our epic Poem-a-Thon all-day fundraiser on 18 May, the launch of Places of Poetry, the inaugural Peggy Poole Award in Liverpool, and a new filmpoem by Jonathan Edwards and film-maker Christopher Morris.

In our feature articles, Sarala Estruch explores the lack of diversity in British poetry reviewing, an imbalance that the Ledbury Emerging Poetry Critics scheme (of which she is a part) aims to redress. Kit Fan‘s imagination takes flight as he prepares to judge the next members’ poems competition on the theme of ‘the moon’, chosen to coincide with the fiftieth anniversary of the first lunar landing. Marking another anniversary, Briony Bax, Editor of Ambit, offers a droll account of the first sixty years of the magazine.

Our Young Poetry News pages present new challenges: can you write a poem inspired by Carol Ann Duffy, whose term as Poet Laureate ends on 30 April? We celebrate the latest Foyle anthology The Walls Were Not Big Enough to Hold You, and look ahead to this year’s competition. We also feature exciting spoken word events: a Young Poets Takeover SLAMbassadors Edition in The Poetry Café, London, and ‘Borderlines’, a joint project between The Poetry Society and Boom Satsuma, looking at borders and boundaries, hosted by the award-winning poet Joelle Taylor.