Ishion Hutchinson on the origins and originality of the Greek poet

“I believe that there is no parthenogenesis in art.” A poet’s statement, once applied to his own work, can appear unrelenting and more wishful than true. ‘Parthenogenesis’ comes from the Greek words for ‘virgin birth’ and here, in the case of George Seferis (1900—1971), the unrelenting and the wishful are indistinguishable. They compound what is enduring and true of his work, an Eliotian desire to intersect the timeless with time, something Eliot, a presiding influence over Seferis, says “is an occupation for the saint”. Seferis may not have been too happy with “saint” – “angel” (which frequents his poems) perhaps or just plain “poet” – but parthenogenetically speaking, since there is nothing original in Seferis (except, fervently, Original Sin via Eternal Return), his extraordinary gift occupies that substantial realm beyond original: the realm of the marvellous real.

Exile and return rule Seferis’s poetry. The exilic condition subsumes the latter, making both the same state or act. Here the shade of Odysseus falls acutely, yet only partially. Odysseus’s twenty years away from Ithaca are spent, mythical distances aside, within the same small geographical location. Compared to Seferis, who had several diplomatic postings abroad, Odysseus is indeed a lost traveller, a military peripatetic who makes a single return, rather than an exile. Their obvious difference, one an ancient and the other a modern, matters insofar as the speed of Seferis’s many returns underscores the speed at which home is disappearing and is the crisis at the heart of his work.

Shuttling back and forth raises an existential dread: homelessness. On every return, from London and Cairo and New York City to various Greek islands, home dims: “After years abroad you’ve come back / with images you’ve nourished / under foreign skies / far from your own country” (‘The Return of the Exile’). While images are powerful and potentially dangerous, they are but elusive phantoms within the self. Often in the verses, these benign mental images, of loss, escalate into material dispossession equally painful and disturbing

The houses I had they took away from me. The times
happened to be unpropitious: war, destruction, exile;
sometimes the hunter hits the migratory birds,
sometimes he doesn’t hit them. Hunting
was good in my time, many felt the pellet;
the rest circle aimlessly or go mad in the shelters.
(‘Thrush’)

Futility, madness: how harrowing to love a country divided from within! Contempt comes easy, though this is precisely what Seferis resists and his love for his fractious islands moves with sorrow. “Wherever I travel Greece wounds me”: that’s the first line of a poem called ‘In the Manner of G.S.’. Its self-mocking title widens into the ultimate disillusionment, the horror which is the land itself, both departing and becoming somewhere one cannot depart from, much less return to:

Meanwhile Greece goes on travelling, always travelling
and if we see ‘the Aegean flower with corpses’
it will be with those who tried to catch the big ship by swimming after it
those who got tired of waiting for the ships that cannot move
the ELSI, the SAMOTHRAKI, the AMVRAKIKOS.
The ships hoot now that dusk falls on Piraeus,
hoot and hoot, but no capstan moves,
no chain gleams wet in the vanishing light,
the captain stands like a stone in white and gold.

Even when these desperate swimmers make it onboard the ships, as they do, for example, in the great early sequence ‘Mythistorema’, they are presented as “committed to non-existent pilgrimages unwillingly / murmuring broken thoughts from foreign languages”. Their journeys, between islands, seems penitential.

Penitential because of a mytho-historical haunting, put this way in section 21 of ‘Mythistorema’: “the ancient dead have escaped the circle and risen again / and smile in a strange silence.” A later poem, the celebrated ‘Helen’, amplifies the silence, stretching the deadly defects of the past into the present: “Great suffering had desolated Greece. / So many bodies thrown / into the jaws of the sea, the jaws of the earth / so many souls / fed to the millstones like grain.” Rather than an inventory of ruins, or setting up of monuments, his is a poetry of recovery. He achieves this with an uncanny simplicity. The directness of tone feels personal. The pitch works against poetical memory (and memorialisation, in a civic sense), towards the difficult, unresolved enigma, that of a collective of individuals, buried in the Greek landscape. By concentrating on these many souls, undifferentiated victims of undifferentiated nature, Seferis raises them up for our sympathy and compassion. This marks another of his departures from Homer (at least the Homer of The Iliad), where the focus is on heroic men.

Abroad, pain momentarily softens with nostalgia. Yet, in ‘Letter to Rex Warner’, he finds himself in a world reduced to “everything’s television”, where he “can’t touch things easily at close quarters” due to the alienating powers of modernity. Buildings refract the terror; in New York City, skyscrapers “show their windows gleaming / like the skin of a huge sea-monster” and, in ‘Letter of Mathios Paskalis’, skyscrapers “will never know the coolness / that comes down on Kifisia”. While in Toledo, the famous Hospital de Tavera, polluted “with vapours from cars going off / to the country” is merely a large shell “full of crippled children gesturing / at me or at others following me” and a backdrop for trysting lovers (‘Tuesday’). Mechanical sounds ratchet his psychic disintegration; in Cairo:

Trumpets, trams, cars backfiring, screeching brakes
chloroform his mind in the same way as one counts
so long as one holds out before being lost
in the numbness, at the surgeon’s mercy.
(‘Days of April ’43’)

On the streets of London, he hears the broken plangent sounds of accordions played “by well-dressed beggars”, who “call on the angels / and their angels are hell” (‘Fog’). (Accordion-playing Hells Angels?) Meanwhile in remote Hampstead, he sees himself in epiphanic terms, like “a dog / forgotten / that barks / alone / and searches for its master / or the Second Coming / or a bone”. He aches to return to his Grecian home, to live as a hermit poet in “a hut on a hill”, by the sea, where

in front of my window
is a sheet immersed in bluing
spread there like the sea
all I want in my vase
is even a false carnation
red paper wound on wire
so that the wind
the wind cannot control it easily
as much as it wants to.

The above belongs to a poem from a collection called Mr Stratis Thalassinos, the name of Seferis’s poet alter ego, a thoroughgoing Prufrock, who ends his meditation with: “I prefer a drop of blood to a glass of ink.” Consanguinity, not aesthetic – the fraught pleasures of exile – then is the poet’s epitaph and what calls him back to his home sea. Seferis’s poems, in effect, are written in blood.

Once home, however, the pain of the returned exile turns deeper inwards. Irrevocable changes everywhere, the landscape unrecognisable. Poems bristle with agon, the raw intensity of the self wrestling against oblivion, hoping to uphold “the depths below memory”. He wanders islands, distant and disembodied. On every island, something distorts the beauty. Here, for instance, Santorini:

The tilt exacts an Odyssean reversal, the most crucial way Seferis modulates the Homeric shade: Odysseus returns home to restore justice, the opposite happens in Seferis’s hands; injustice proliferates and civilisation – all the natural, social, and political life of the islands – stands perpetually violated. Time remains irredeemably out of joint.

Seferis’s work recognises and opposes this lurking oblivion, this tilt. On one hand, the history of imperial conquest by the Ottoman Empire, weighs heavily. On the other, the horror of World War I and World War II and British colonisation of Cyprus in the twentieth century, are double burdens threatening memory. The task to revitalise memory is immense and fatal and many poems acknowledge so:

The dignity of the cry rests on how the labourer – poiētēs, maker – purifies self-dramatisation into actuality, by the force of the lyric. The cry instances and surpasses Eliot’s formulation in ‘Marina’ – “Living to live in a world of time beyond me” – for Seferis makes time and self into something beyond, and that beyond is, again, the marvellous real. Because the poet finally is not interested in documentation but exaltation. And it is through this harmonic pressure (no parthenogenesis!) his archipelago finds a chorus in a single, human voice.

A fresh edition returns the voice always there, invincible as breath, as blood. We are compelled to hear and sing back:

Here end the works of the sea, the works of love.
Those who will some day live here where we end –
should the blood happen to darken in their memory and overflow –
let them not forget us, the weak souls among the asphodels,
let them turn the heads of the victims towards Erebus:

We who had nothing will school them in serenity.
(‘Mythistorema’) 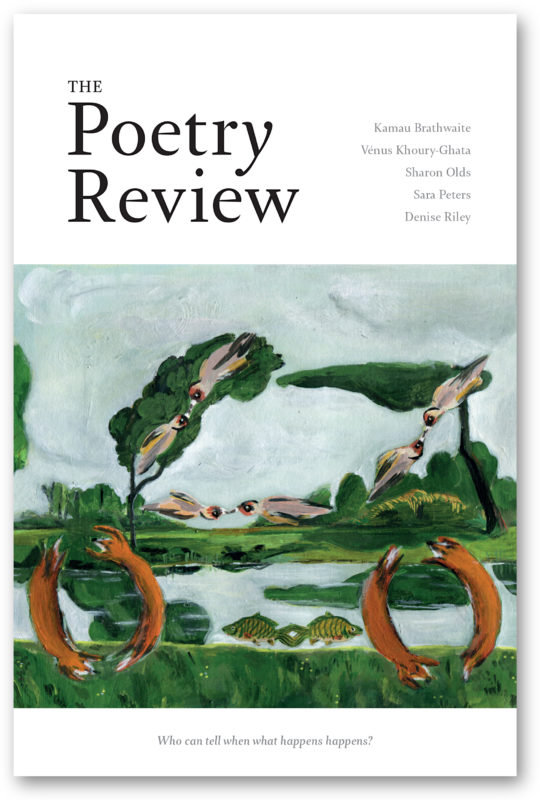 Ishion Hutchinson was born in Port Antonio, Jamaica. His latest book is House of Lords and Commons (Faber, 2017). This essay was first published in The Poetry Review, 109:1, Spring 2019. © The Poetry Review and the author.